Ten days. That’s the number of days that I will be away from my girls when the final rehearsals and first tour for Luz begin this weekend. That’s the longest I’ve ever been away from Gloria, and while Lola has seen me leave plenty of times, we are probably closer now than we have ever been, so ten days is a lot for us.

Part of what I wanted to show in Luz is that women can be artists and mothers at the same time. But that isn’t really true. I can’t be in a studio in California “being an artist” and simultaneously braid Lola’s hair or make Gloria breakfast in Tucson. We can’t really be both at the same time. But maybe being in a studio everyday doesn’t make you an artist. Maybe changing diapers and doing laundry doesn’t make you a mother. Maybe that identity comes from something else. And it may be true that if these things are not done, we can hardly call ourselves artists or mothers, but I hope that my identity as either comes from something more profound than “what I do.” I hope there is another reason to be an artist or a mother than just “the doing.”

I believe it comes down to the knowledge that love takes sacrifice. If you love your kids, you give something else up. If you love to make art, then you give something else up. Wherever there is love, sacrifice follows. When I leave my kids this week, it is going to hurt. Maybe not enough to ruin us, but there will be a price to pay, and it is up to me to decide if the price is worth it. For Luz, I know it is. And I’m pretty sure that my girls if not already will someday (maybe when they really begin to understand love) be okay with that sacrifice too. 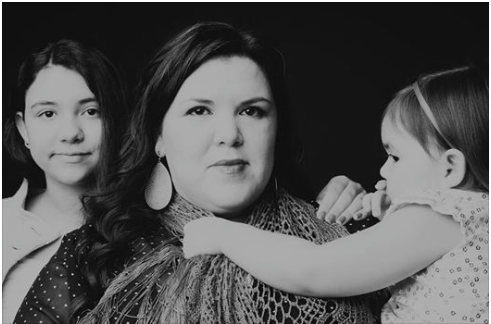