Though Luz gets presented in the course of just one night, the choreography for Luz has been in the works for several years! In the next series of quick blog posts, I'd like to share some of the inspiration, development, and meaning behind some of the pieces that will be presented in Luz. I hope these shed some light on what it means to be a mother and an artist--and how those amazing roles can be acknowledged, celebrated, and honored. 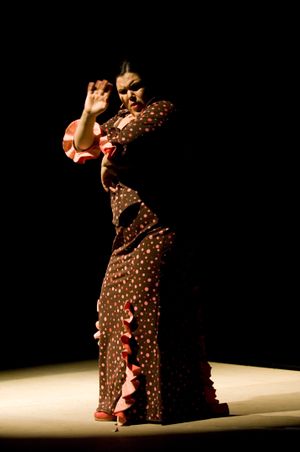 This piece was inspired by the genesis story – the story of Eve. I started creating the Zambra in Tucson back in 2008, when I suddenly thought of Eve. I wondered, what would it be like to be created as a fully formed woman? To not go through development stages but to suddenly be, and to suddenly be woman? Never a girl. Never an adolescent. Never in those awkward stages. Never wondering what will change next in your body, and never worried about your changing identity. Also, naked and not ashamed. I thought about how amazing it would feel to be Eve. How amazing to be the mother of all people.

Of course, this beginning of Eve is before the fall. All of this is in the state of perfection. Eve, in this state, is woman without pain and without loss. She is woman in bloom fully, capable of complete intimacy with man and his equal.  Before her, there was a question of whether or not God’s perfect creation was good enough for man. With her, it is. Reading this I know that as a woman and mother, I’m in the unique position to realize the role of what the bible metaphorically calls the church: the bride. In the bible, the bride (the church) waits for the groom (the Savior). Women and mothers--we understand waiting. We understand expectation.

Of course, Eve doesn't stay in perfection. Things change and that is when she must endure suffering, but her suffering is directly linked to her identity as a mother. I think mothers (and artists) understand this idea: that creating hurts, and yet we are called to it. We were made for it.